US Navy carrier-based dive bomber pilots flew the Douglas SBD-3 Dauntless at Coral Sea and Midway. The Dauntless entered naval service in 1941. The plane was sturdy enough for pilots to dive at a near-vertical 80 degrees, which ensured greater accuracy on the bomb run. Diving from 22,000 feet, the Dauntless covered the distance to her 1,500 to 1,200 foot bomb release point in about 15 seconds. Lt. Commander Wade McClusky led Enterprise's dive bombers on the morning of 4 June. When McClusky arrived at the coordinates where the Japanese carriers were believed to be, they were nowhere to be found. Acting on his own initiative, McClusky kept searching, even though his aircraft were running dangerously low on fuel. When a solitary Japanese destroyer was spotted, McClusky set his course based on the destroyer's heading. The gamble paid off and led the dive bombers directly to the Japanese carriers at the precise moment when fighter cover had been pulled down to sea level to repel attacks by American torpedo squadrons. At 1022 hours, Enterprise's dive bombers attacked the Japanese carriers Akagi and Kaga. Both carriers' decks were strewn with ordnance and fuel as crewmen rearmed and refueled aircraft. In moments, Akagi and Kaga were burning infernos. Nearly simultaneously, Yorktown's dive bombers arrived on the scene, led by Lt. Commander Max Leslie, and her aircrews smashed a third Japanese carrier, the Soryu. Within minutes, three of the six Japanese carriers that attacked Pearl Harbor six months earlier were on their way to the bottom of the Pacific Ocean. 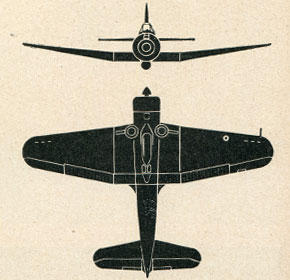 Naval and Marine fighter pilots were equipped with the Grumman F4F Wildcat. Although the Wildcat was a sturdy, well-armed fighter, she lacked the speed and maneuverability possessed by its nemesis, the nimble Japanese Zero. Fighter pilots developed techniques to maximize the Wildcat's strengths and minimize its weaknesses. The most famous and successful technique was the "Thach Weave," created by VF-3 commanding officer Lt. Commander Jimmy Thach and used against the Zero for the first time during the Battle of Midway. The idea was simple enough; two Wildcats flew parallel to each other, with one of the aircraft acting as the bait and the other serving as the hook. When the Zero chose one of the Wildcats to attack, the Americas would turn into and crisscross each other's paths, forcing the Japanese pilot to fly into the hook's crosshairs while pursuing the bait. The tactic was successful no matter which of the two Wildcats the Japanese pilot chose to attack. 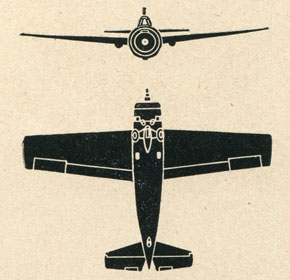 Carrier-based torpedo bomber crews flew the TBD-1 Devastator at Midway. Although it was one of the most advanced naval aircraft in the world when adopted by the US Navy in 1937, it had quickly been outclassed by advances in naval aircraft design. Although Devastators were marginally successful during raids on the Marshall Islands and at the Battle of the Coral Sea, they were slaughtered at Midway. One of the TBD's shortcomings was that it was incredibly slow; the Devastator had a cruising speed of only 130 mph. In addition, the Devastator's primary armament, the MK 13 aerial torpedo, was notoriously unreliable and required torpedo bomber crews to make long, straight and slow attack runs. The delicate MK 13 torpedo had to be launches from an altitude of no greater than 60 feet, at a speed of no greater than 110 knots and at a range of 800 yards. This made the Devastator easy prey for the Japanese fighters and gun crews. Of the 41 TBD-1s that participated in the Battle of Midway, 37 were lost. With 68 of 82 crewmen killed, Torpedo Squadron 8 from Hornet was almost completely wiped out. Ensign George Gay the only Torpedo 8 Devastator pilot to survive the attack on the Japanese carriers. Not a single American torpedo found its mark at Midway. However, the torpedo aircrews brought the Japanese fighter cover down to sea level, leaving the skies above the Japanese fleet clear and undefended when dive bombers from Enterprise and Yorktown arrived. 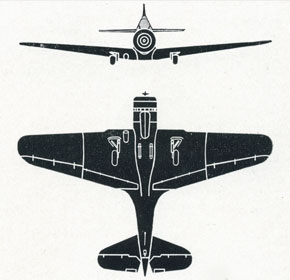 A small detachment from USS Hornet's Torpedo Squadron 8 flew the Avenger into combat for the first time at Midway. Torpedo Squadron 8 was the first squadron scheduled to receive the aging Devastator's replacement. Six aircrews flew the brand new aircraft to Midway Island from Hawaii after missing Hornet's departure from Pearl Harbor by one day. At 0600 hours on the morning of 4 June, Torpedo Squadron 8 (detached) took off shortly before Japanese planes struck Midway. At 0705 the Avengers, without the benefit of fighter escorts, began their attack on the Japanese carrier Hiryu. Swarms of Japanese fighters descended on the torpedo planes and five of the six Avengers. The sole surviving pilot, Ensign Bert Earnest, pressed his attack despite severe damage to his aircraft's controls. Earnest's turret gunner, Seaman 1st Class Jay D. Manning, was killed by machine gun fire from the attacking Japanese fighters. Radioman 3rd Class Harry M. Ferrier, manning the Avenger's belly gun, was wounded and knocked unconscious. Earnest, bleeding profusely from shrapnel wounds to the cheek, launched his torpedo at a Japanese light cruiser but missed. Earnest limped back to Midway, where he made a crash landing. His plane Avenger had sustained over 70 holes from bullets and cannon shells, but Earnest and Ferrier recovered from their wounds and returned to active duty after the battle. 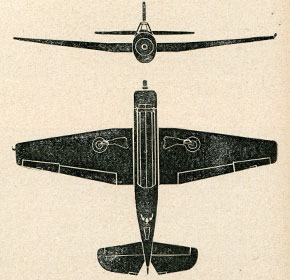 Four Martin-built US Army Air Forces B-26 medium bombers flew off Midway Island to engage the Japanese carriers in the early morning hours of 4 June. The small force was armed with torpedoes, even though the crews had no training in making torpedo attack runs and the aircraft wasn't designed to carry this type of ordnance. The B-26s began their attack run on the Japanese fleet about five minutes after the Avengers made their ill-fated attack. The B-26s did not fare much better. Japanese fighters quickly splashed two of the attacking Marauders. The two surviving B-26s launched their torpedoes, but again, no hits were scored. Both aircraft made it back to Midway, heavily damaged. One of the remaining B-26s flown, by USAAF 1st Lt. James Muri, had over 500 bullet and shrapnel holes in it. 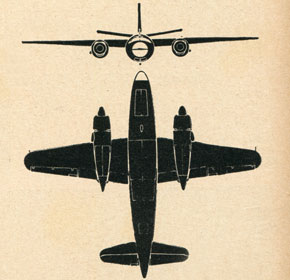 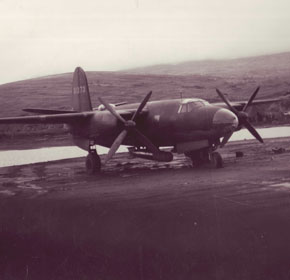 The strict requirements of the Doolittle Raid could only be met by one aircraft in the US inventory at the time, the North American B-25 Mitchell. However, the B-25 was by no means perfect for the task. The Mitchells flown by Doolittle and his men were heavily modified to make them more suitable for the long-range mission. The ventral turrets were removed to make room for an additional 1,141 gallons of fuel. The expensive, top-secret Norden bombsight was replaced by a low level sight called the "Mark Twain," which only cost twenty cents to produce. To save weight, the planes' rear guns were replaced by broomsticks in a cosmetic attempt to discourage Japanese fighters that might attack from the rear. The Doolittle Raid's B-25s were the only aircraft to bomb Tokyo until 1944, when B-29 Superfortresses began operating from the Marianas Islands. 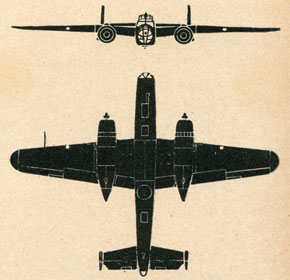 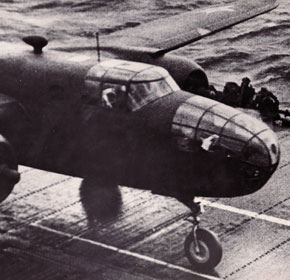 Marine Fighting Squadron 221, based on Midway Island, was primarily equipped with the Brewster Buffalo. Adopted in 1939, the F2A was the first monoplane fighter operated by the US Navy and Marine Corps. However, the F2A's abysmal performance, accompanied by poor tactics employed by inexperienced pilots at Midway, ended the Buffalo's service with the US military after only three years. In addition to being outnumbered three to one, Marine pilots were plagued by the Buffalo's malfunctioning guns, poor maneuverability and unarmored cockpit. Of the 20 Buffalos that challenged the Japanese aerial assault on Midway, 13 were shot down. Losses of Marine pilots were exacerbated by the merciless Japanese practice of strafing the parachutes of helpless pilots that had escaped their stricken aircraft. The pilots' opinion of the Buffalo is best summed up by one of Midway's survivors, who said, "It is my belief that any commander who orders pilots out for combat in an F2A should consider the pilot as lost before leaving the ground." 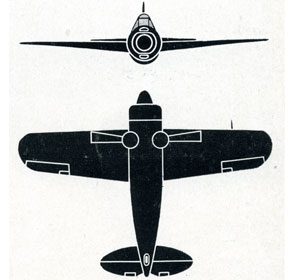 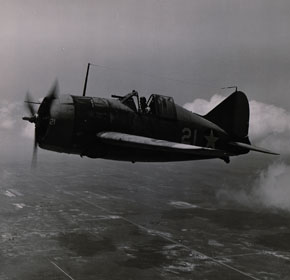 Marine Scout Bombing Squadron 241 was equipped with the SBD Dauntless and its predecessor, the SB2U Vindicator. The Marine aircrews, more so than anyone else, felt the desperation that was being thrown into Midway Island's defense. The Marines of VMSB-241 and VMF-221, which was equipped with the equally antiquated Buffalo fighter, were thrown into the fray with second-rate aircraft that made them about as menacing as clay pigeons to the seasoned Japanese pilots they faced at Midway. Beginning on the morning of 4 June, 28 gallant Marine bomber crews began a battle of attrition against the Japanese fleet that cost the squadron two commanding officers in two days. By 5 June, VMSB-241 had been cut down to 12 operational aircraft — six Dauntless dive bombers and six Vindicators. Captain Richard E. Fleming, leading the Vindicator section, began a glide bombing attack on the Japanese cruiser Mikuma that morning. Japanese anti-aircraft fire set Fleming's engine aflame. Undeterred, Fleming maintained his attack and dropped his 500-pound bomb, narrowly missing Mikuma's stern. Captain Fleming, unable to pull out of his dive, crashed into the sea, killing both himself and his radioman/gunner, Private 1st Class George A. Toms. Captain Fleming was awarded the Medal of Honor posthumously. It was the only Medal of Honor awarded during the Battle of Midway. 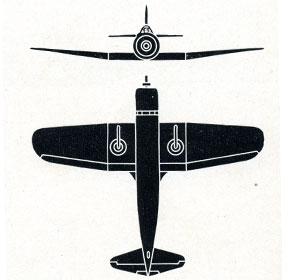 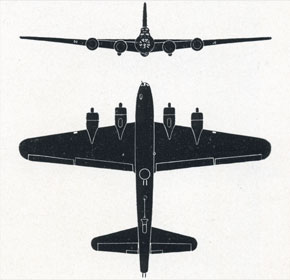 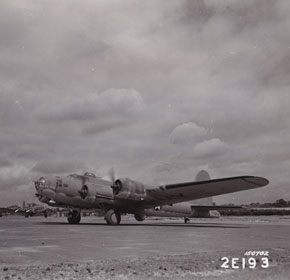 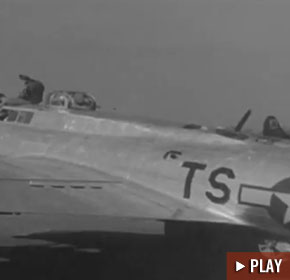 The Catalina proved invaluable at Midway, serving as both a reconnaissance and a search and rescue aircraft. Catalina crews operating from Midway Island located the Japanese invasion fleet on 3 June and the carrier strike force on the morning of 4 June. 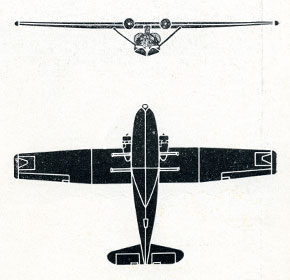 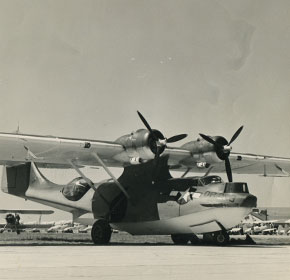 The Japanese Zero ruled the skies over the Pacific in 1941 and 1942. The Zero enjoyed advantages in speed, maneuverability and climb rate over all Allied fighters in the first year of the war. However, the Zero's agility came at the cost of the pilot's safety. Amenities such as armored plates in the cockpit and self-sealing fuel tanks, which were standard equipment in most US aircraft, were absent in the Zero. A short burst from an attacking plane's machine gun was enough to turn the Zero into an inferno. By 1943, new American aircraft such as the F4U Corsair and F6F Hellcat outperformed the legendary Zero, ending its reign as the scourge of the skies. 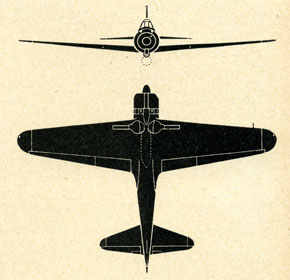 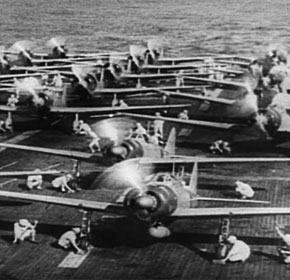 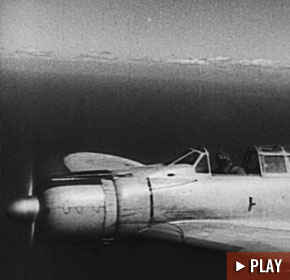 The D3A Val was the Imperial Japanese Navy's carrier-borne dive bomber throughout most of the war. The Val served in nearly every major action of the war and earned the distinction of sinking more Allied warships than any other Axis aircraft. Although obsolete by 1943, the Val soldiered on throughout the war, eventually being used for suicide attacks in the closing months of the war. 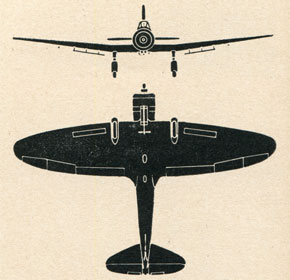 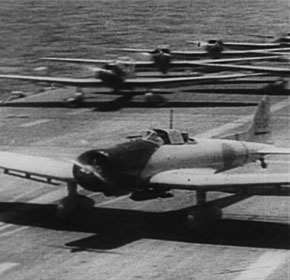 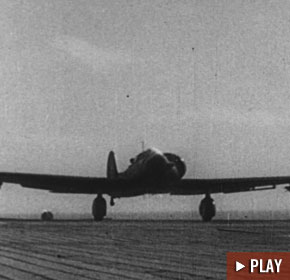 The B5N Kate was one the of the most successful torpedo bombers fielded by either side during World War II. The Kate was used as a level bomber as well and, operating in this fashion, a B5N scored the hit that destroyed the USS Arizona at Pearl Harbor. B5Ns also participated in attacks on the US fleet carriers Yorktown, Lexington and Hornet, all three of which were consequently sunk. 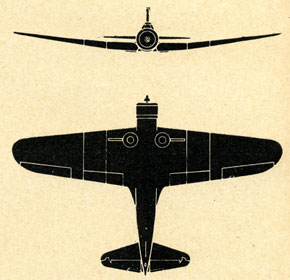 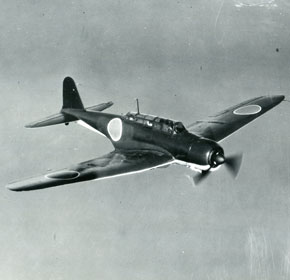